28.04.2021
April 29 - Birthday of the .UZ domain, implementation of DNSSEC technology and issue of an anniversary postage stamp 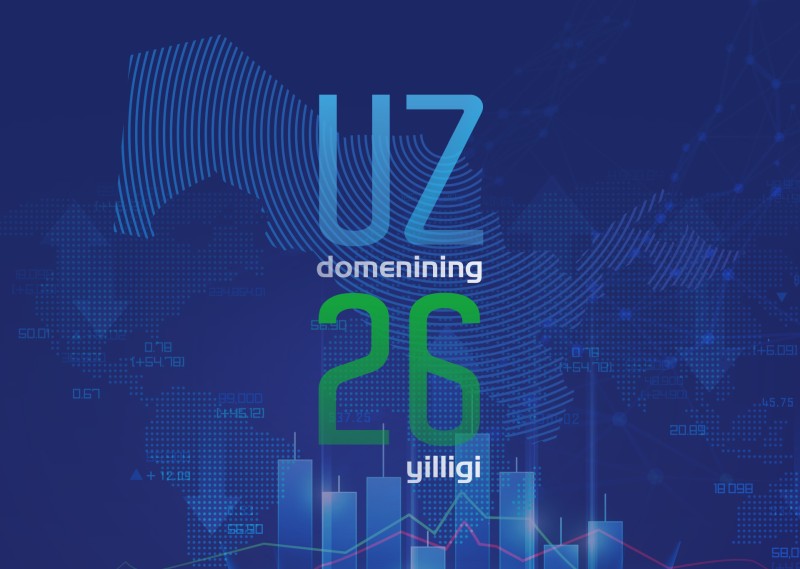 April 29 is the birthday of the .UZ domain.

This means that the Uzbek segment of the Internet is already 26 years old.

The application for the domain zone was approved by ICANN (Internet Corporation for Assigned Names and Numbers - an international organization created to regulate issues related to domain names, IP addresses and other aspects of the functioning of the Internet) in 1995 and it appeared - ".UZ - National top-level domain of the Republic of Uzbekistan".

Highly appreciating the significance of the national domain and the merits of specialists involved in the industry, the government of the country initiated the issue of a commemorative postage stamp in honor of the anniversary of the National domain .UZ. The stamp depicts hands symbolically supporting the globe and the .UZ 25 monogram in the colors of the national flag, symbolizing that the domain is part of the global network.

Of course, the use of stamps for their intended purpose has become infrequent. And the higher is the value of the brand for those who remember the early days of Uznet, who set up the first servers and made the first registrations.

For philatelists, this is an obvious rarity, since the stamp was issued in a limited edition, and cases of issuing a postage stamp in honor of the national domain are very rare.

The release of the brand was planned for the 25th anniversary of the domain in 2020, but all festive events and conferences were postponed to autumn 2021. We believe that by September this year, flights will return to their previous regime and the traditional IT-Week in Uzbekistan will open with a beautiful ceremony of presenting a postage stamp.

Internet governance is not a monotonous standard procedure, there are undoubtedly technical standards and obligations to comply with them. But the level of interaction between the state and organizations regulating the Internet: ICANN, RIPE NCC, APTLD, competent and constant balance between security and permissiveness, creating conditions for business on the Internet - all this is reflected in the trust of local and foreign partners and users. The number of domain names in the national segment is approaching one hundred thousand. This is a reflection of the activity of the business environment. 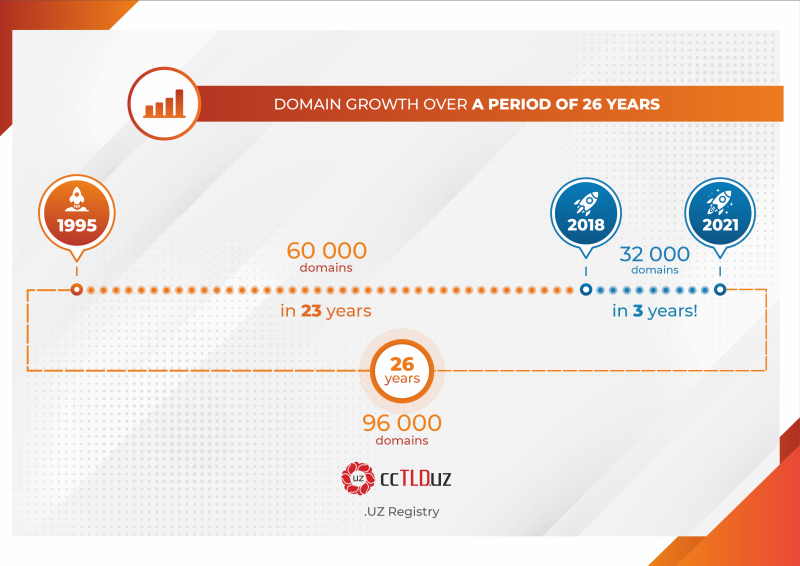 In April 2020, the number of domains was about 78 thousand. That is, in one year, the Uzbek segment gained one fifth of the total. 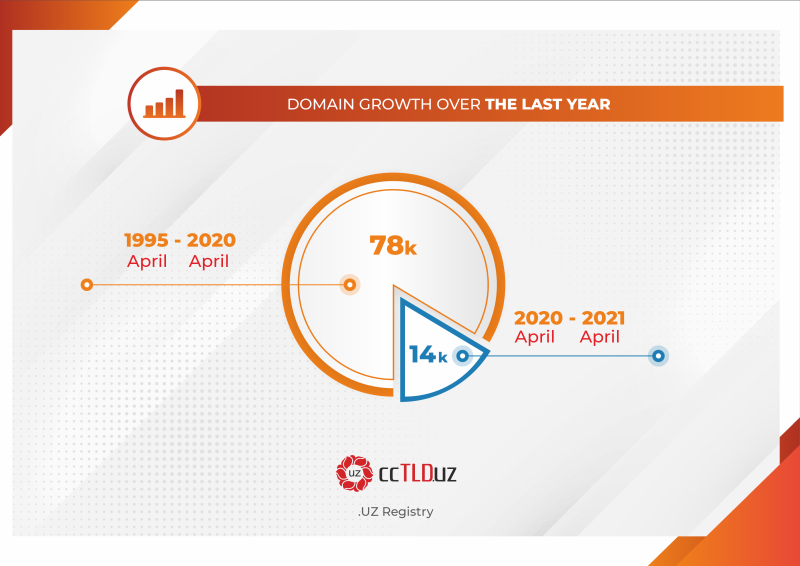 The level of development of the segment can be considered quite high, as evidenced by the large number of foreign participants in the annual conferences of ICANN, APTLD and RIPE NCC in Uzbekistan. Tashkent recently hosted the IGF (Internet Governance Forum). Neighboring countries come to Uzbekistan to learn from experience. For example, immediately upon creating a domain zone, Uzbekistan legally defined and prohibited cybersquatting (registration of domain names containing a trademark owned by another person for the purpose of their further resale or unfair use), despite its marketing attractiveness, and consistently protects official trademark owners from unscrupulous domain resellers. The “interception” of domains is anticipated, that is, the owner cannot lose the domain immediately after the expiration of the registration period.

The Domain Name System (DNS) is a critical component of the Internet infrastructure. DNS servers translate the domain names of sites known to users into IP addresses that computers need to connect to the site. The DNS system is often subjected to attacks, during which attackers try to replace these addresses with the addresses of fraudulent sites, intercept e-mail and website traffic. The threat of these and other attacks remains extremely high, according to a statement from ICANN. Therefore, it is necessary to actively implement measures to protect the DNS system - namely, to implement DNSSEC technology, which allows you to authenticate addresses with a digital signature. 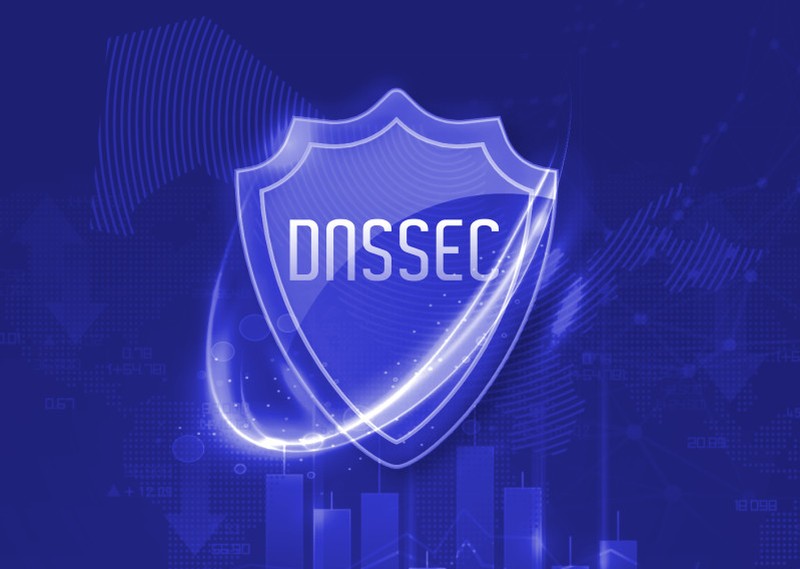 .UZ domain administration represented by UZINFOCOM announces the implementation of DNSSEC technology, a technology of secure domain names for the .UZ domain zone.

Commissioning work related to the implementation of DNSSEC technology was completed by the birthday of the .UZ domain.

For regional domain zones, the implementation of DNSSEC is a historical, technological breakthrough in the field of information technology. The transfer of most web services to use this technology will qualitatively increase the security of transactions on the network.

UZINFOCOM General Director Emil Gimranov said that an active dialogue with organizations regulating the Internet, such as ICANN and APTLD, holding international conferences in Uzbekistan, participation of world experts in the field of best practices, contributed to the improvement of the technical qualifications of the engineering staff of the Unified Integrator UZINFOCOM and brought the implementation of plan. “The technology for exchanging encrypted domain names significantly reduces the use of fraudulent schemes, phishing and fraud. Only the widespread use of security technologies will bring tangible results. We are proud that all seven root servers - essentially the nation's WAN hub at the same time - have switched to DNSSEC. The work lasted several months, including writing software, replacing equipment, adjusting it and agreeing on protocols.

Further implementation of DNSSEC depends on the companies that maintain authoritative DNS servers in their zones - hosters and registrars.

Uznet has become safer for users around the world.

The pandemic has certainly had a dramatic impact on the Uzbek segment of the Internet. The number of online services has grown exponentially. Domain name registrars (there are 25 of them in Uzbekistan today) have begun to register domain names more often without requiring the physical presence of the registrant. The load on the root servers in the country increased several times, so they had to be replaced with more productive ones.

The domain zone of Uzbekistan is actively developing, growing, supported by the state, protected, managed and combating challenges, both global and local.

As a reminder, since March 2003 the Administrator of the national domain .UZ is the Unified Integrator UZINFOCOM. The right to administer the national domain was granted in accordance with an agreement signed with the Internet Corporation ICANN. Domain registration services in the .UZ zone are provided by 25 organizations. In 2021, the .UZ domain zone celebrated its 26th anniversary.